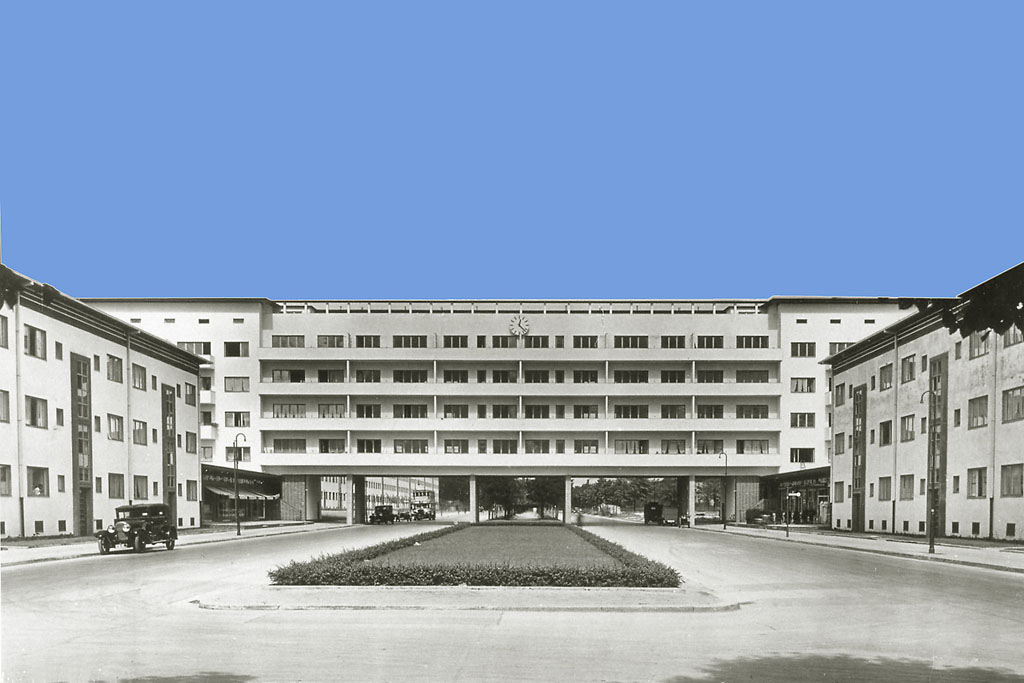 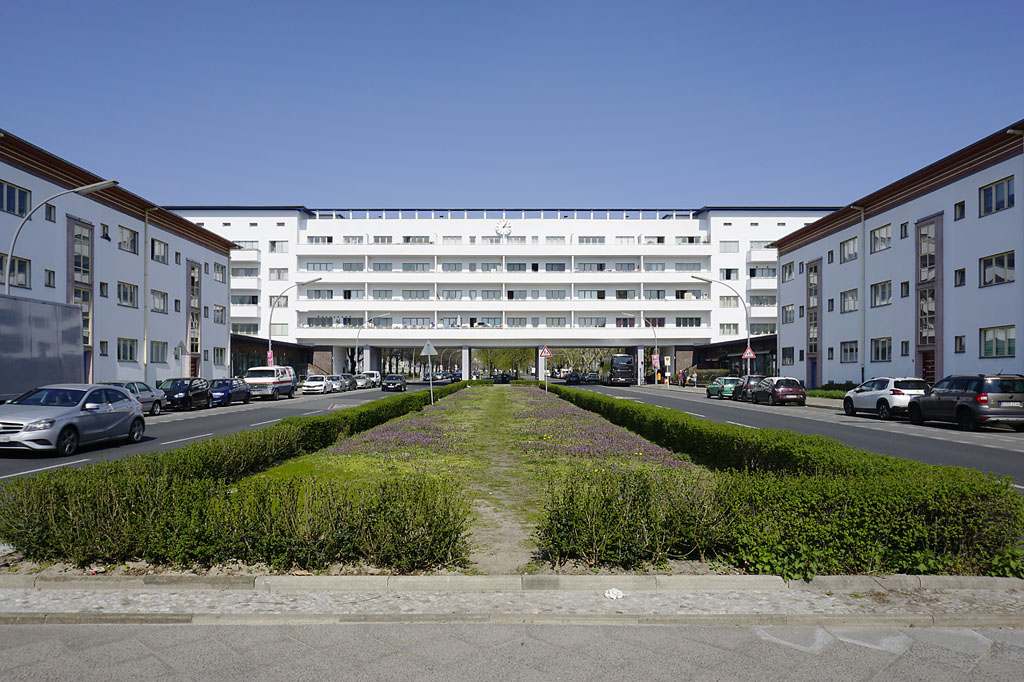 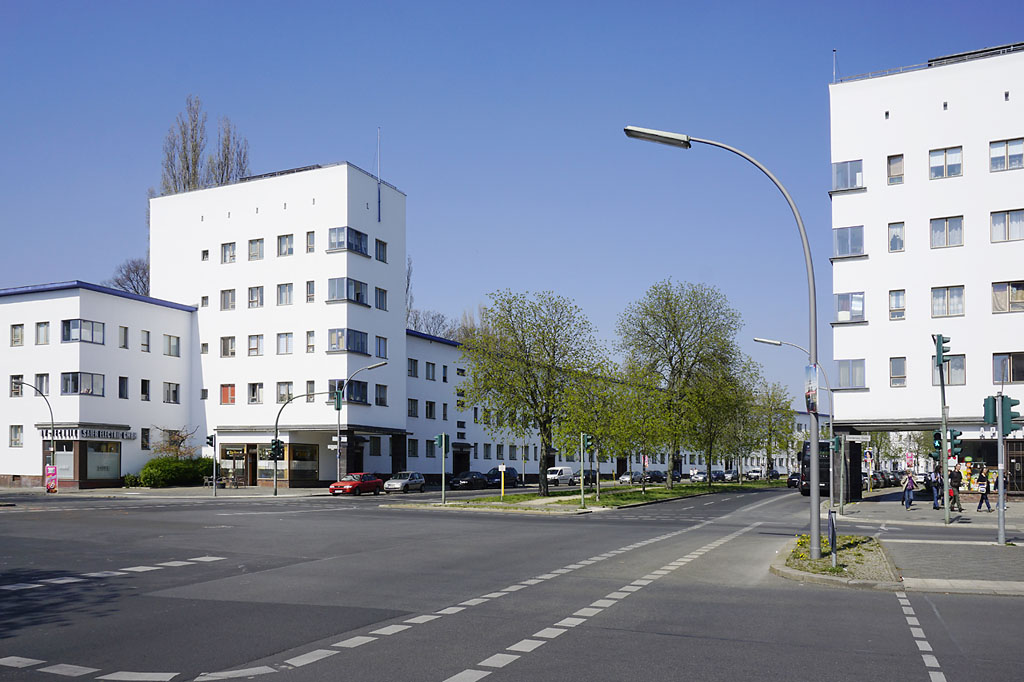 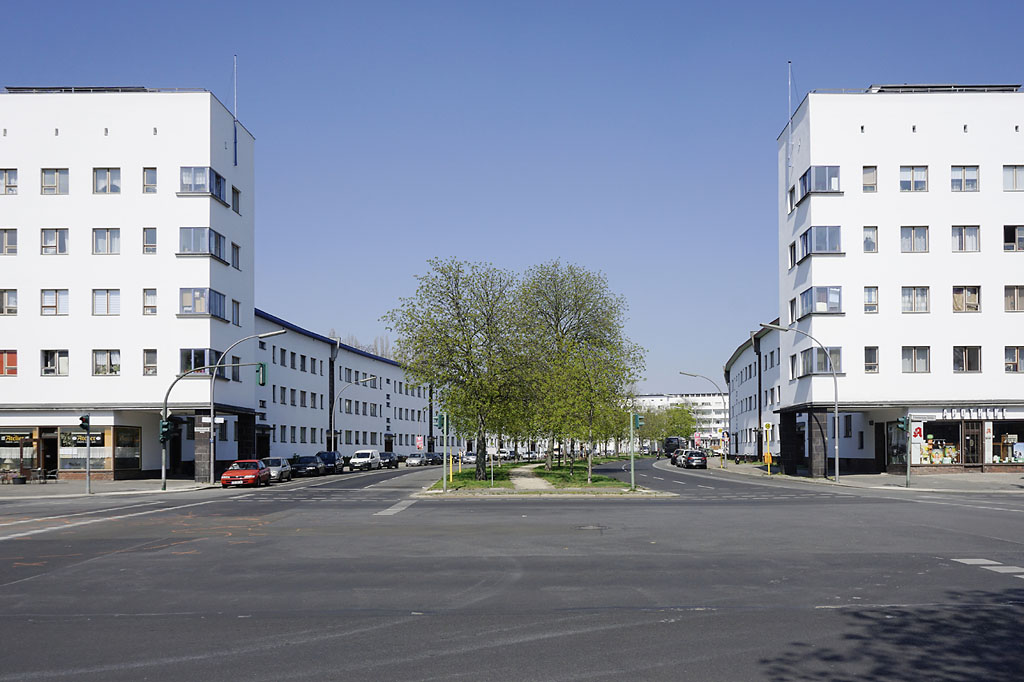 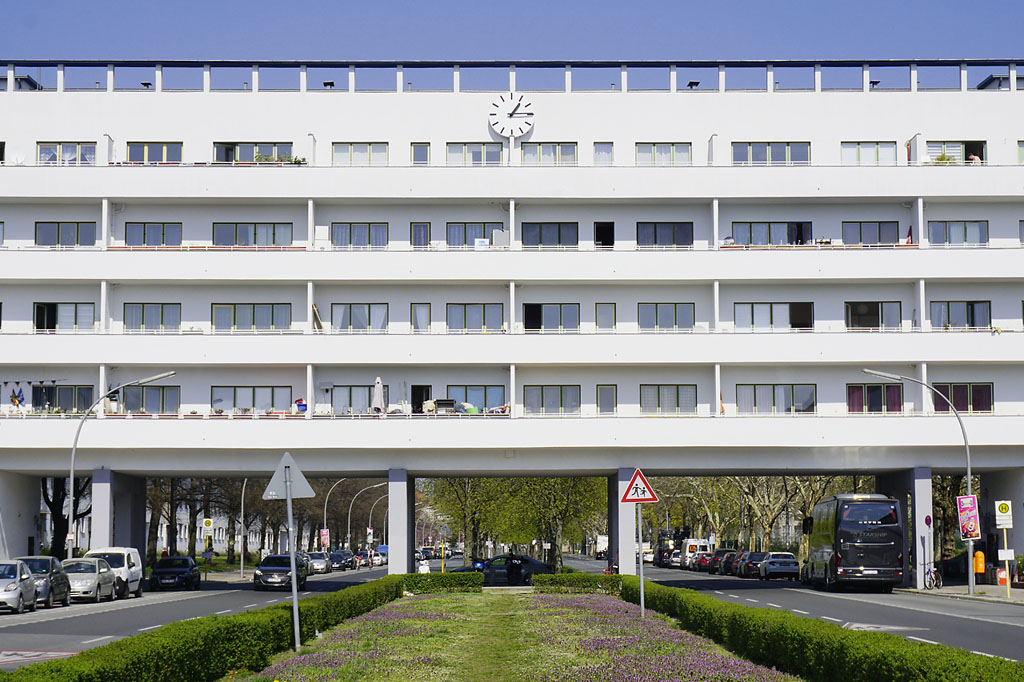 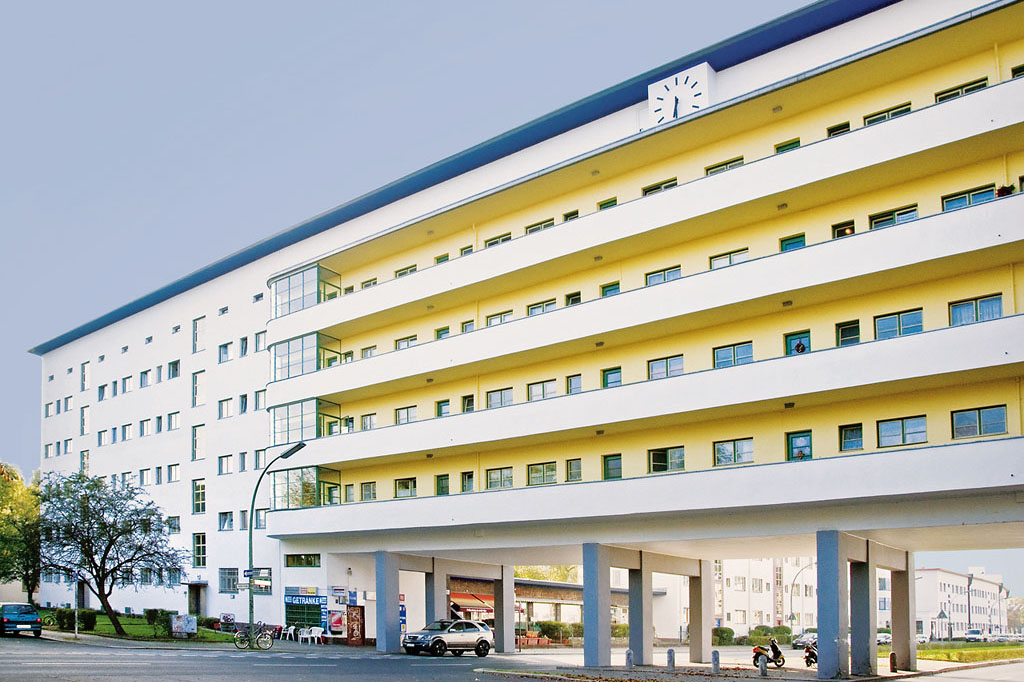 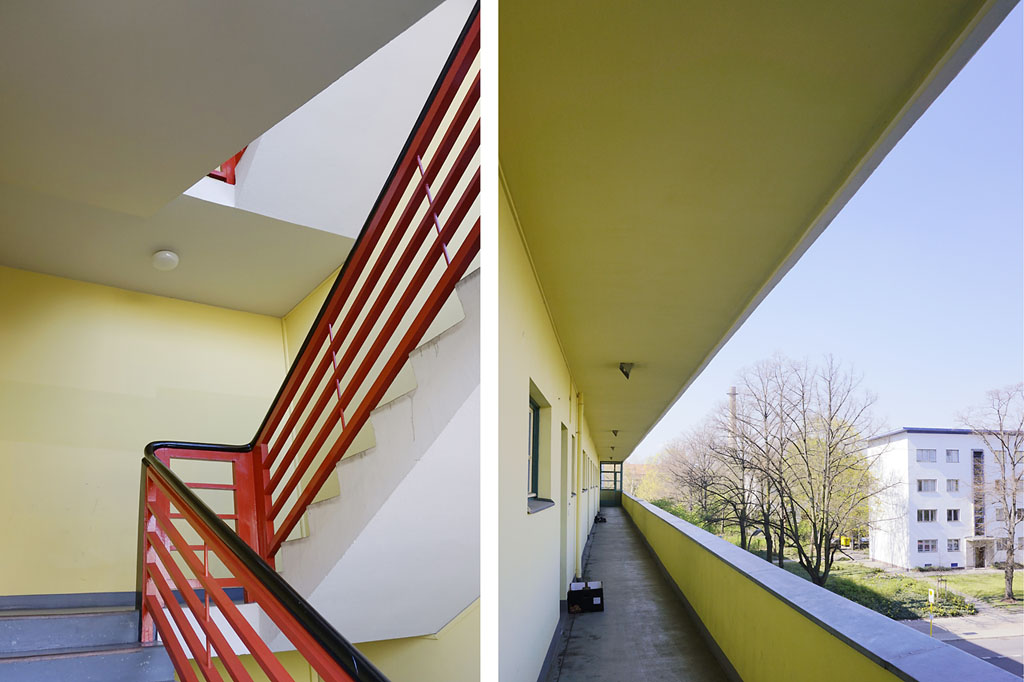 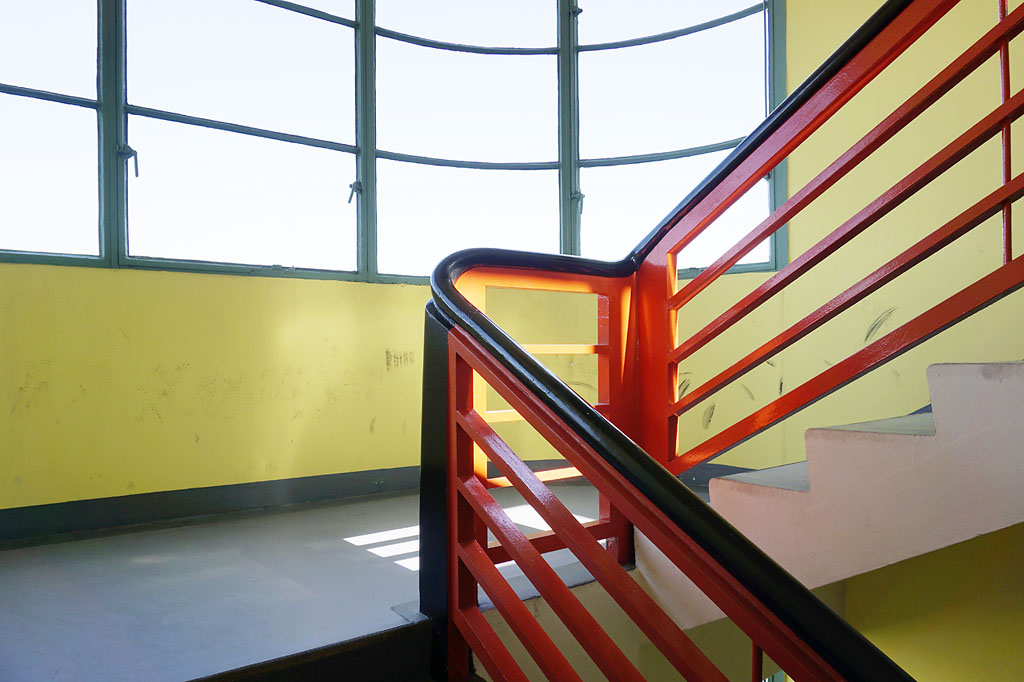 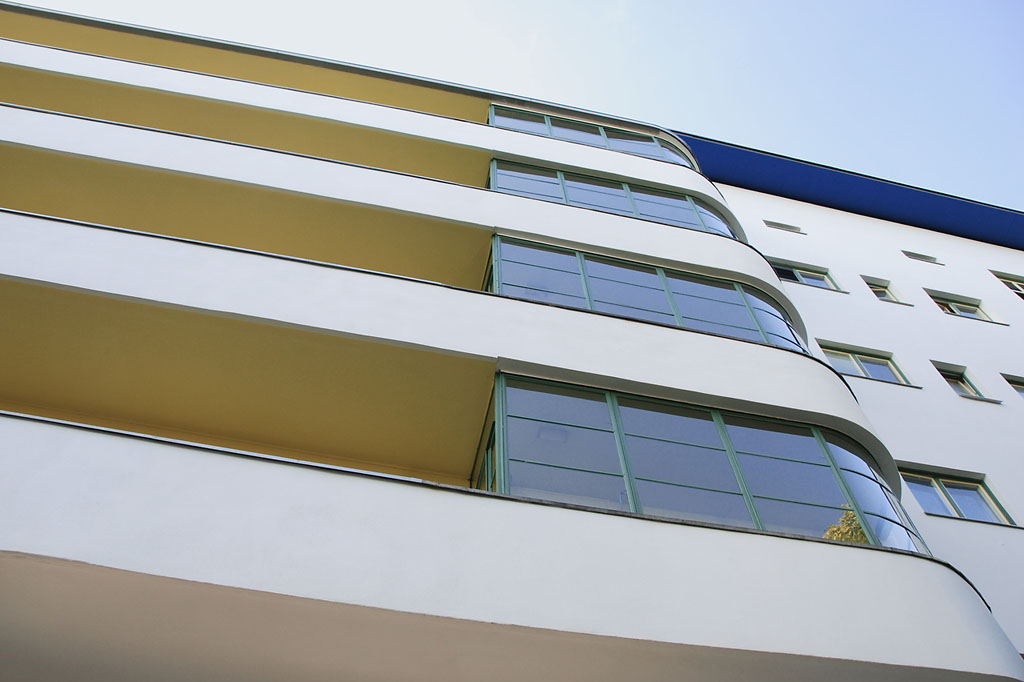 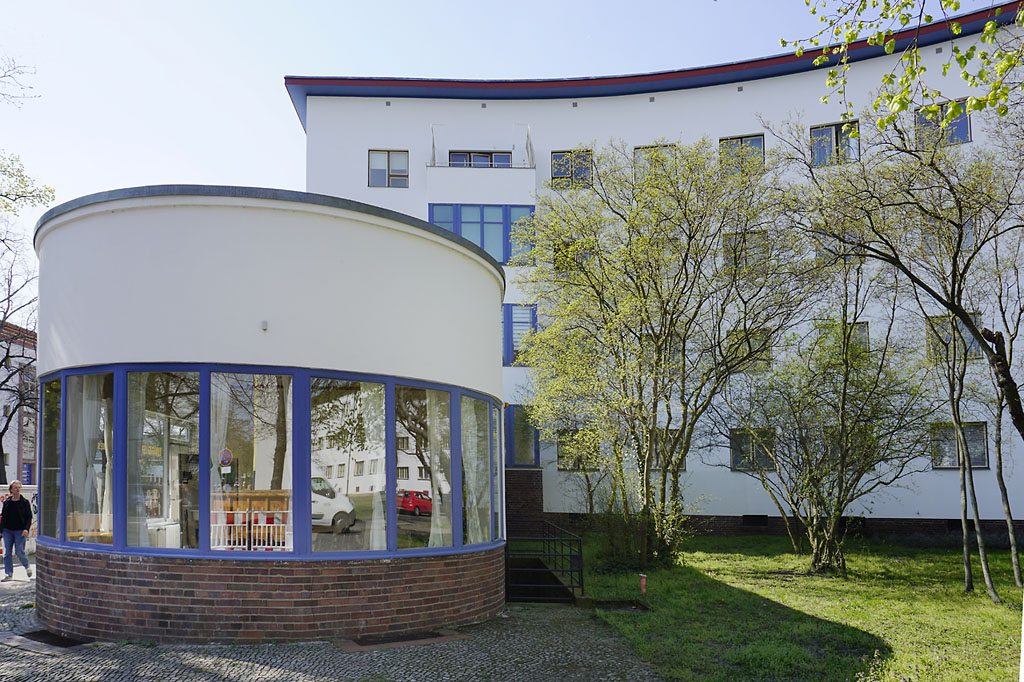 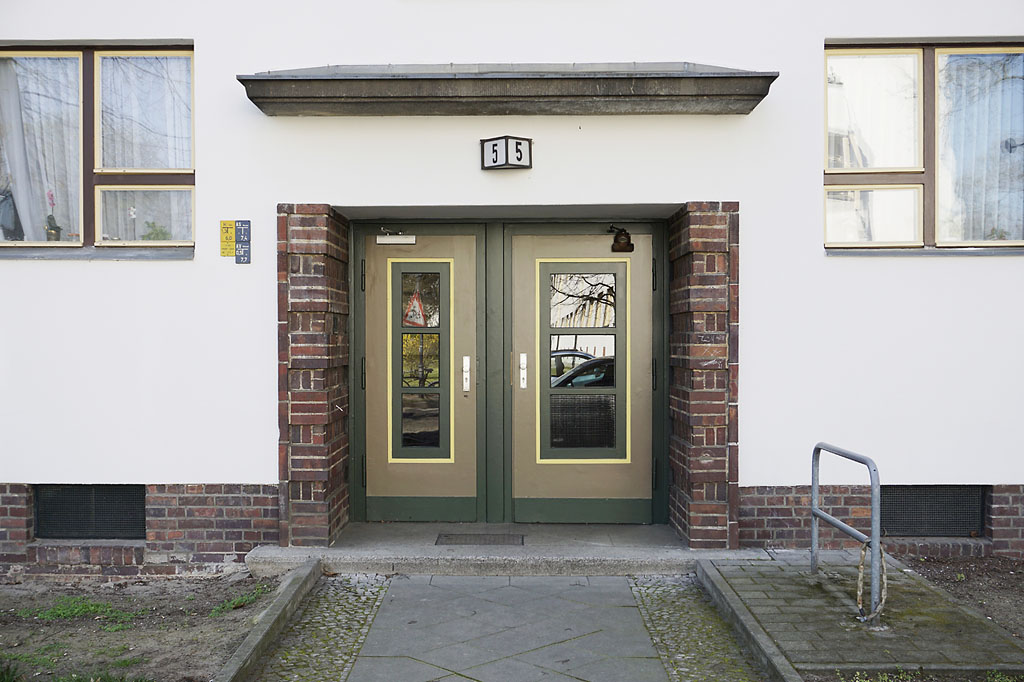 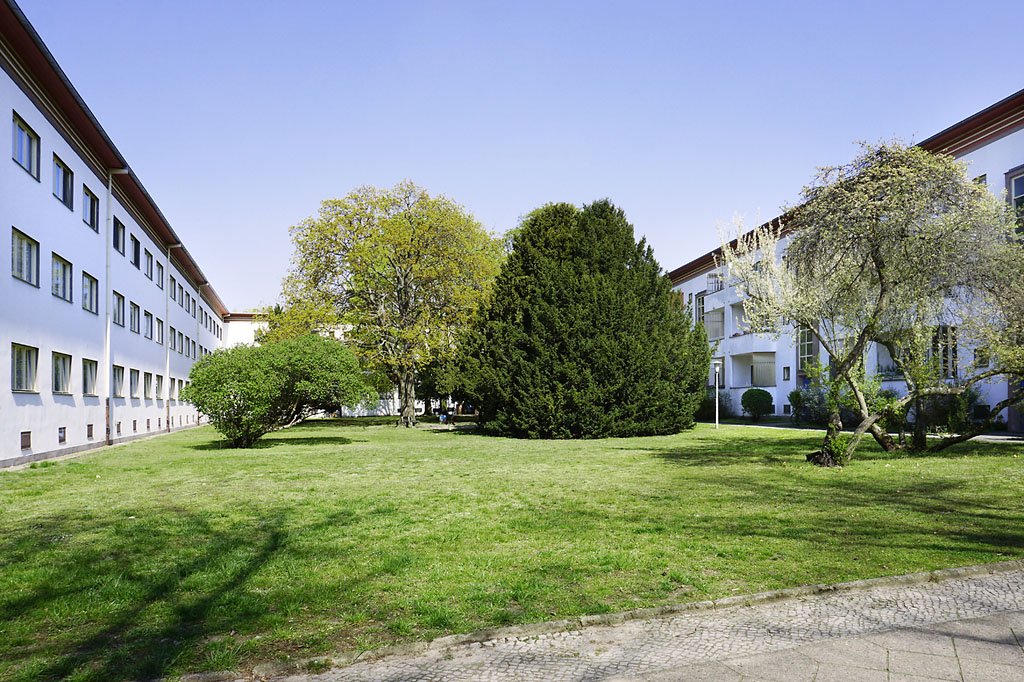 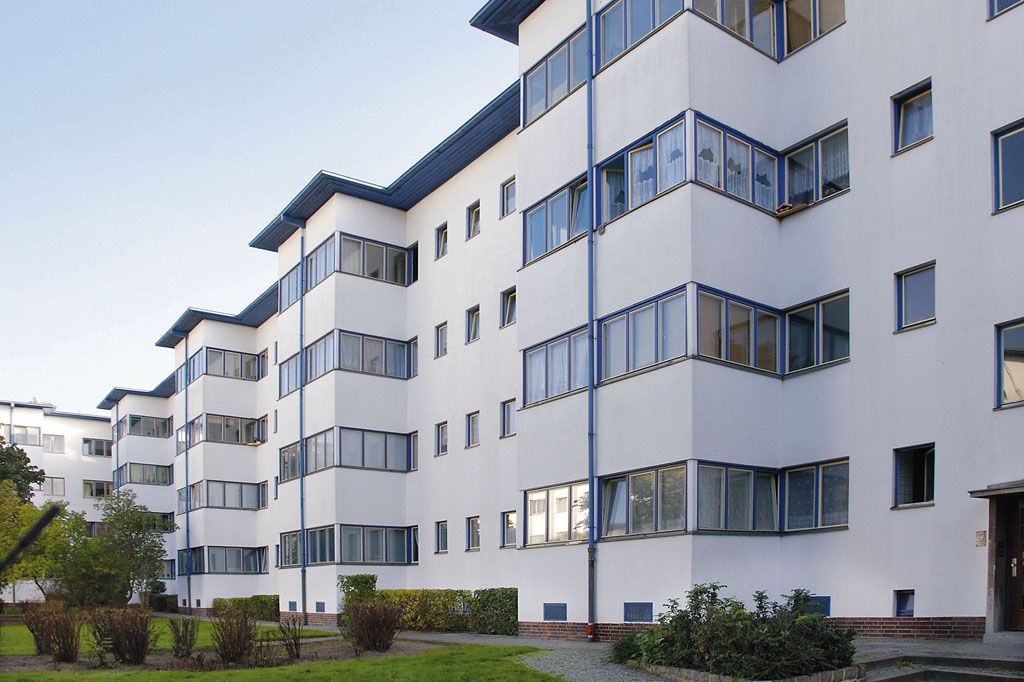 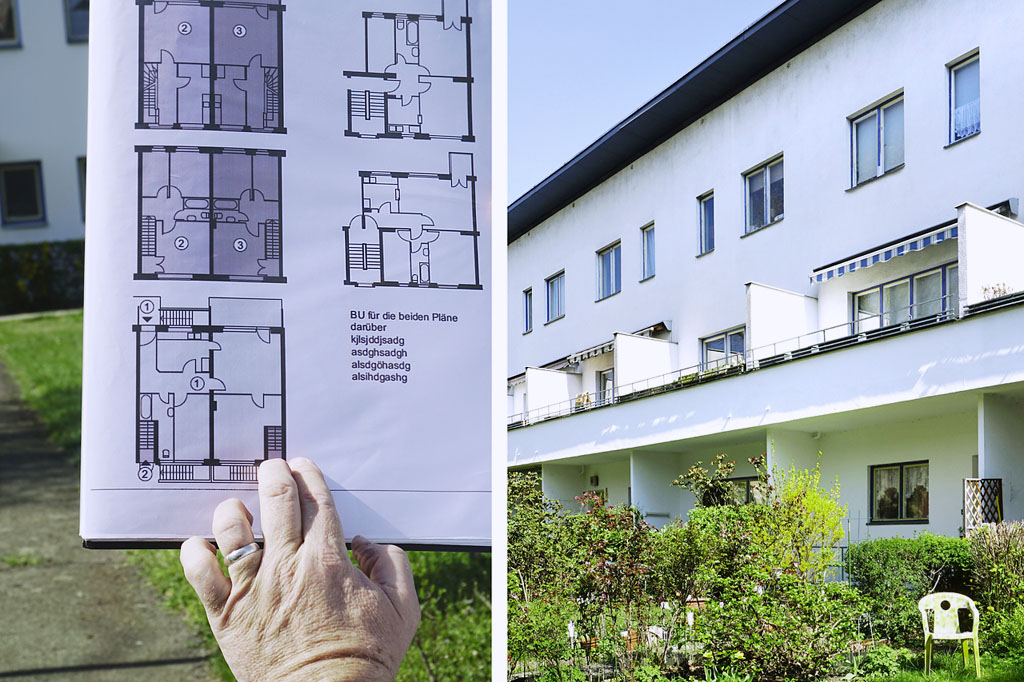 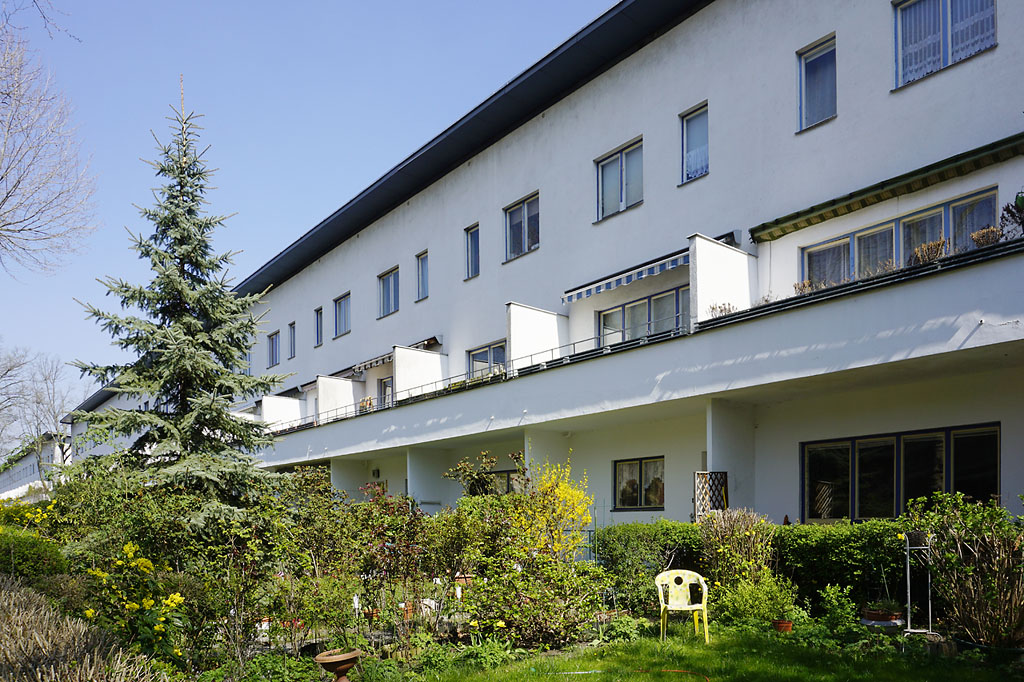 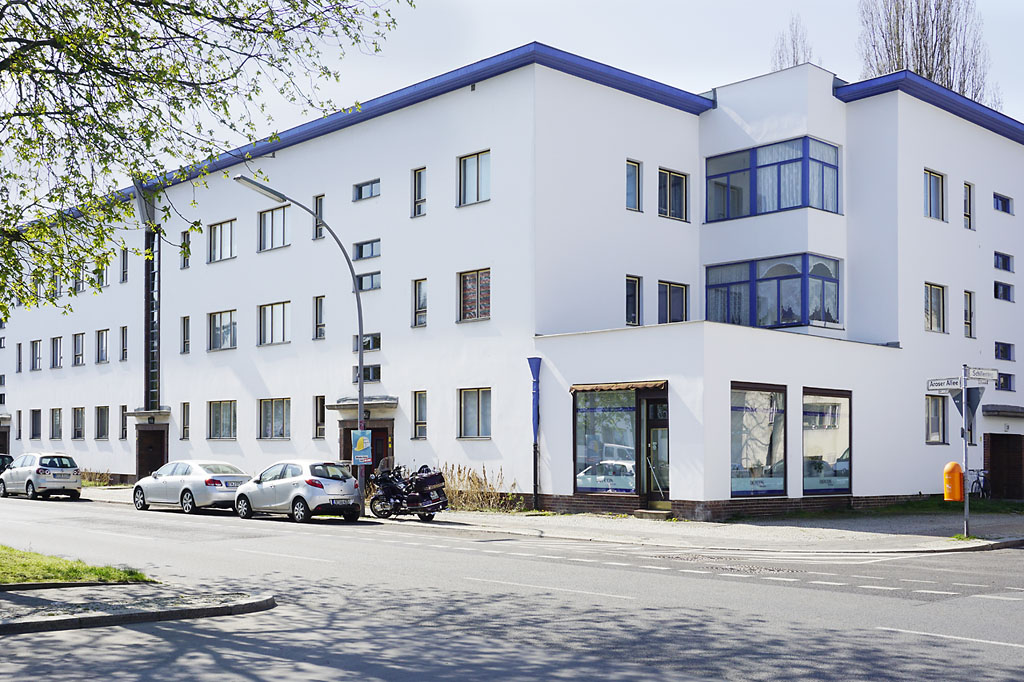 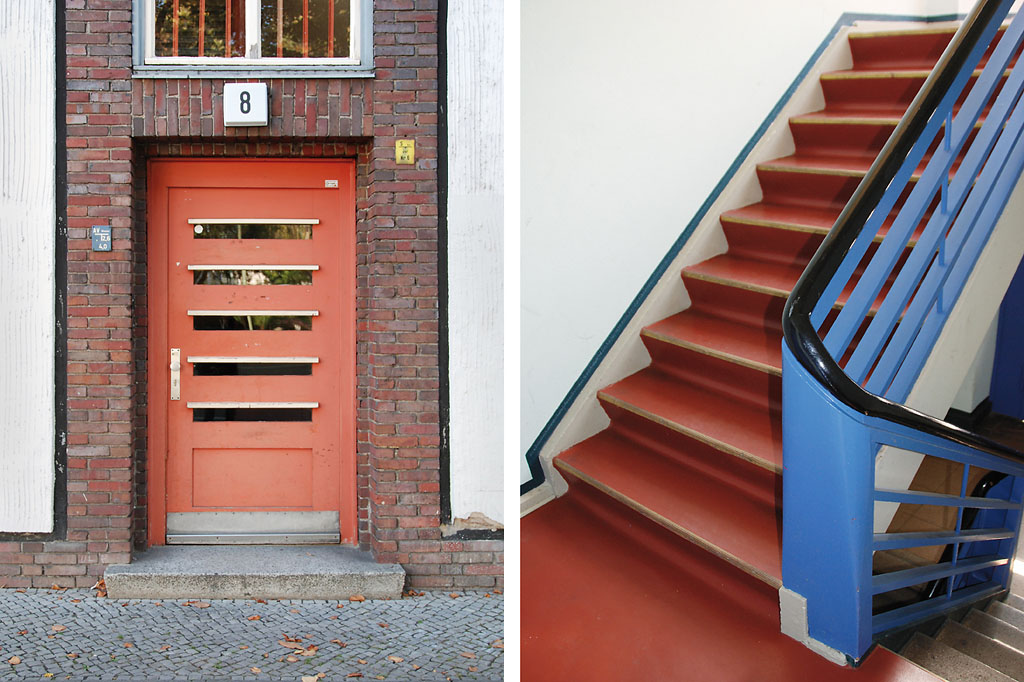 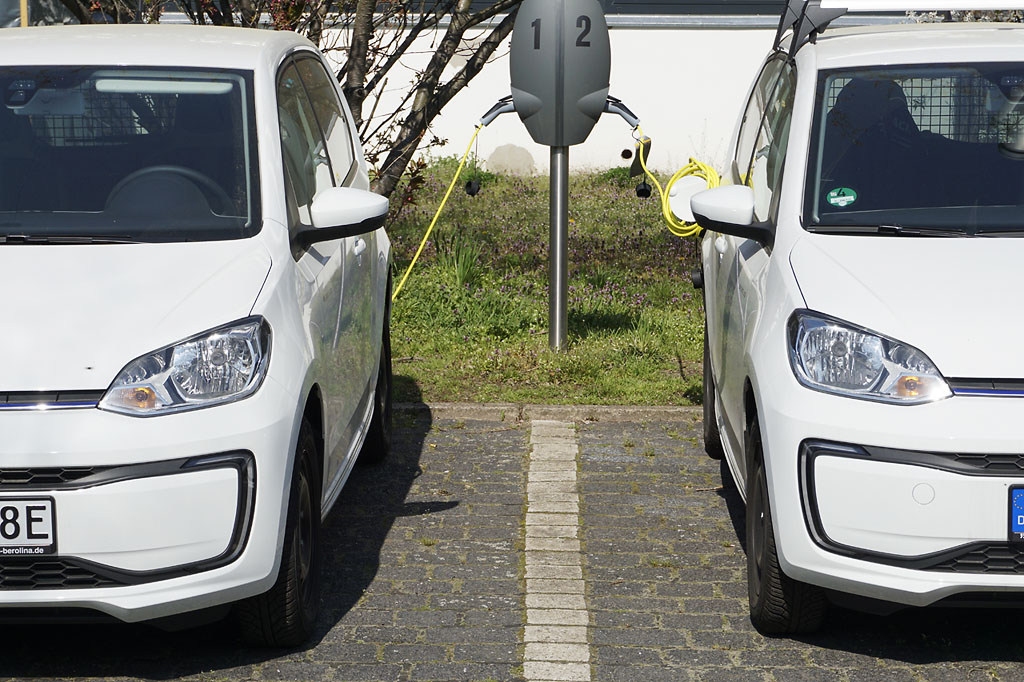 With its clear and angular structures, the Weisse Stadt (White City) housing estate in Berlin-Reinickendorf most closely embodies the formal principles of the New Building movement. Its two central landmarks – the gate buildings and bridge house – celebrate the rise of the automobile. In contrast to Bruno Taut's starkly colored facades, at first glance this complex designed by a trio of architects shines in brilliant bright white. A closer look, however, reveals many colourful details.

Compared to the turn-of-the-century apartment blocks next door, the smoothly plastered, dazzling white buildings of White City are striking yet modest in size. Many architecture lovers refer to some kind of “Bauhaus style”, after the art and design school founded in Weimar, Germany in 1919. This association is understandable but not really true, since none of the three planners involved in the construction of the ensemble ever studied or taught at the Bauhaus. The lack of decoration and a preference for a collision of cube-like elements were typical of the architectural reform movements that called for a new beginning in design. Such movements developed in the mid-1920s in Germany and many other European countries. A little later, the similarities between countries led to International Style, a concept that became the cornerstone of global post-war Modernism. Despite White City’s radically Modernist facades, parts of the complex exhibit the typical Berlin pattern of streetside perimeter blocks, only broken up occasionally by entrances into the inner estate. In its north-east section, on the other hand, there is a Modernist row of terraced homes that would later become a model for part of the Siemensstadt estate.

To emphasize the new and pure aspects of White City, a neutral white was chosen for all estate facades in keeping with the name. But upon closer inspection, elements such as doors, windows, rain gutters and roof overhangs offer colour contrasts. The vibrant hues of the staircase interiors are also a surprise. The construction of the estate drew a lot of attention; in particular, the two gate buildings at the intersection of Aroser Allee, Emmentaler and Gotthard Strasse were highly praised and featured in specialist magazines at the time. Two wide, four-lane traffic axes were deliberately integrated into the design. The era marked the rise of the automobile, a symbol of progress that became part of the overall presentation of White City. The striking bridge house, which spanned northern Aroser Allee and gave its occupants views of traffic flowing through the Swiss Quarter, well serves the aims of the design. From today's perspective, this approach takes some getting used to, but it must be seen in the context of society’s enthusiasm for new technology of the day. Nevertheless, the planners attached great importance to intimacy and privacy in the layout as well as the location of apartment doors throughout the complex.

Towards the end of the 1920s, Berlin’s economic situation deteriorated due to the Great Depression, spurring demand for low-cost apartments, that is, with one-and-a-half to two-and-a-half rooms. In addition, revenues from the newly created house interest tax gradually dried up. For this reason, the construction of White City was financed purely from a special construction programme launched by the city. Against this background, it was extremely important that building methods, floor plans and serial construction were lean, cutting costs and increasing efficiencies. Under the direction of Martin Wagner, Berlin’s municipal building officer, four planners were involved in the design of this residential ensemble with 1,268 units. The overall urban development plan was drawn up by Swiss architect Otto Rudolf Salvisberg, who also planned the bridge house in the middle of the complex. Further construction phases were designed by architects Bruno Ahrends and Wilhelm Büning. The design of the green and open spaces was undertaken by landscape architect Ludwig Lesser, who was already involved in the Falkenberg Garden City development. Lesser designed green residential courtyards with footpaths and access paths reminiscent of parks. The buildings of White City were comprehensively refurbished and its open spaces restored in the 2010s in line with monument protection rules.

When it was built, the infrastructure of White City was unusually good. Its two dozen shops, a doctor's surgery, a café, a pharmacy, two laundry rooms and a kindergarten ensured residents had an outstanding supply of goods and services, and set extra design accents in the process. The kindergarten in the roughly triangular courtyard still exists today, while a school originally designed by Salvisberg north-east of Aroser Allee was never built. The latter site now hosts a sports field. The central district heating plant was much more economical than single heating furnaces and remarkable for the time. However, the heating plant and attached industrial laundry were removed in 1968 before the estate was placed under monumental protection. At virtually the same location, Deutsche Wohnen, the current owner, commissioned an environmentally friendly combined heat and power plant in April 2012, one of the largest such facilities in the German housing sector.