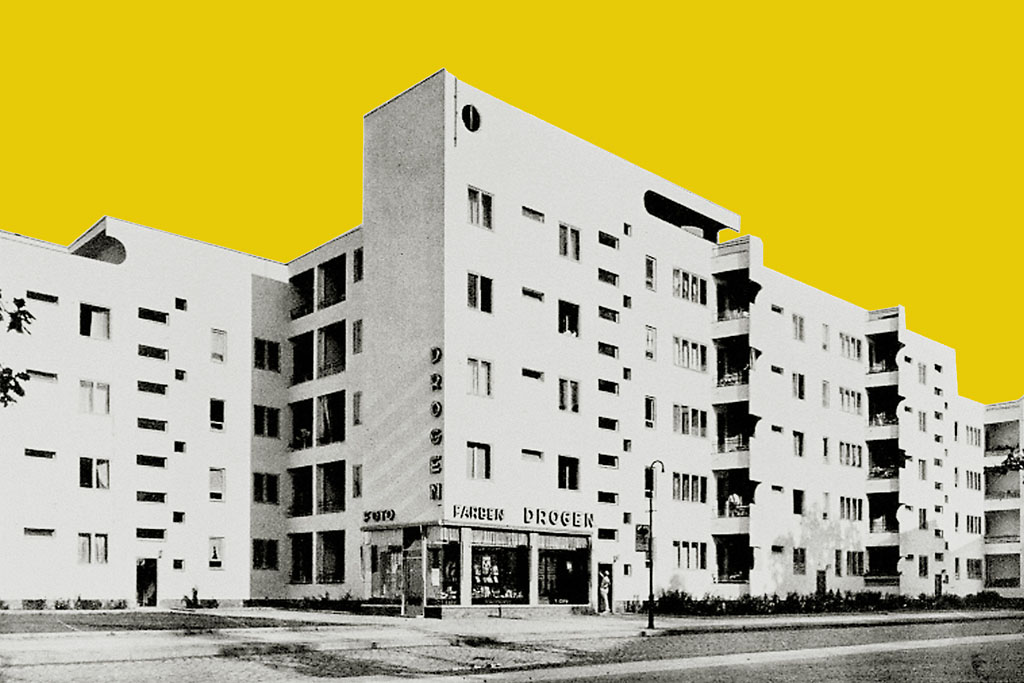 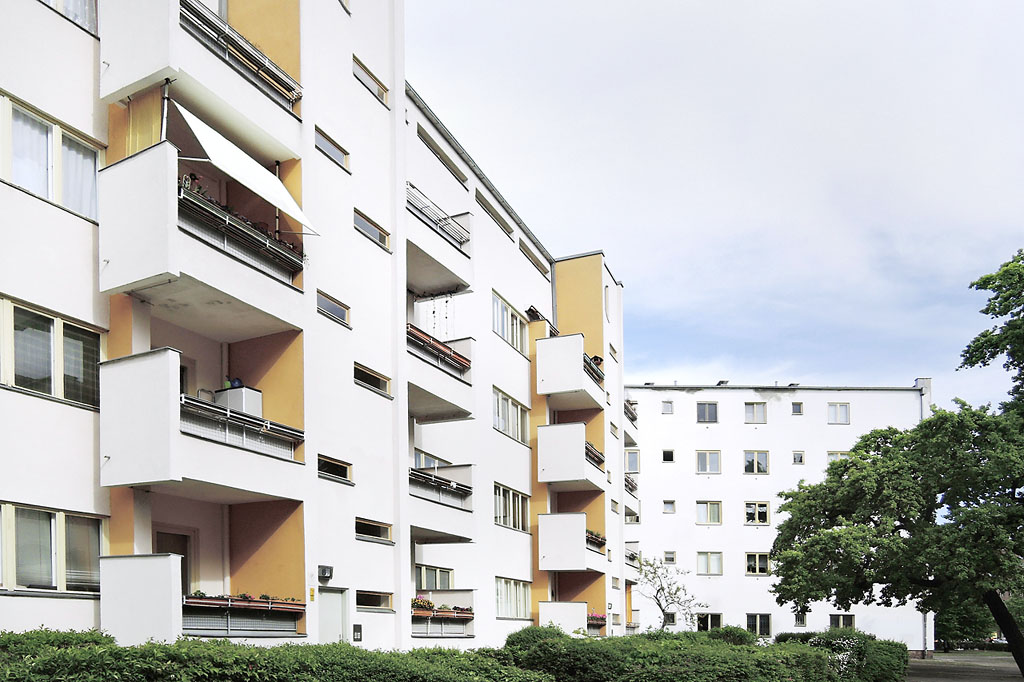 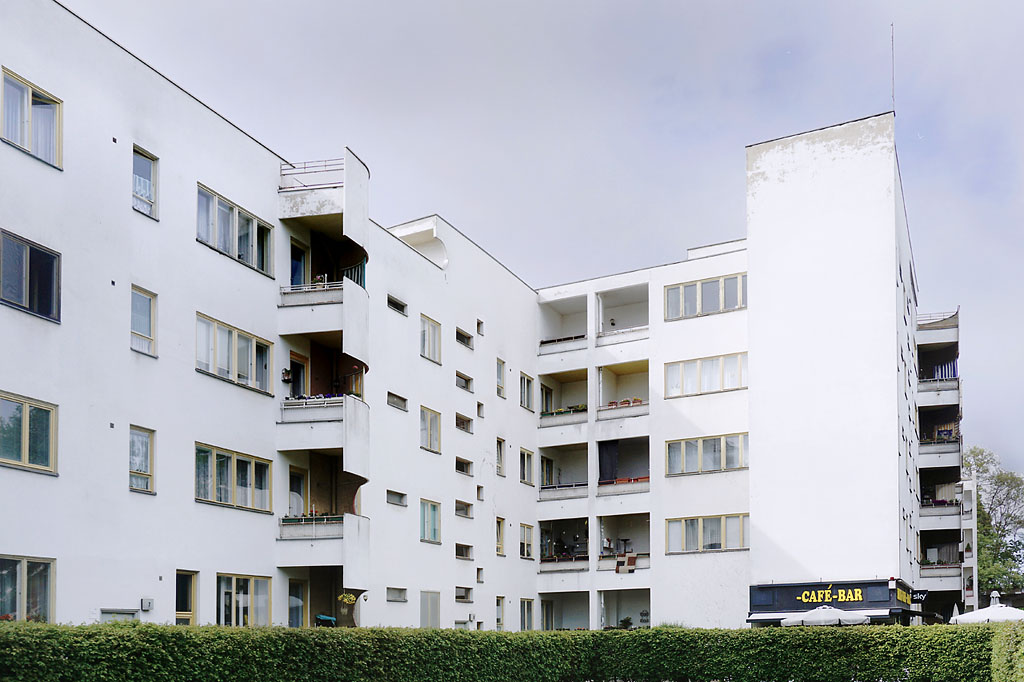 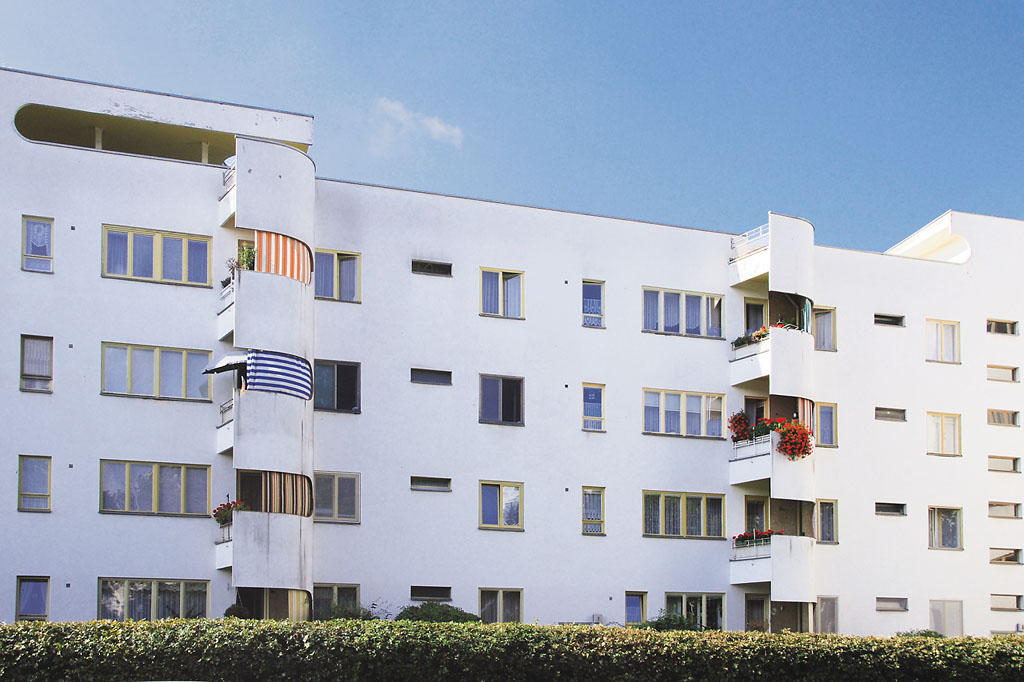 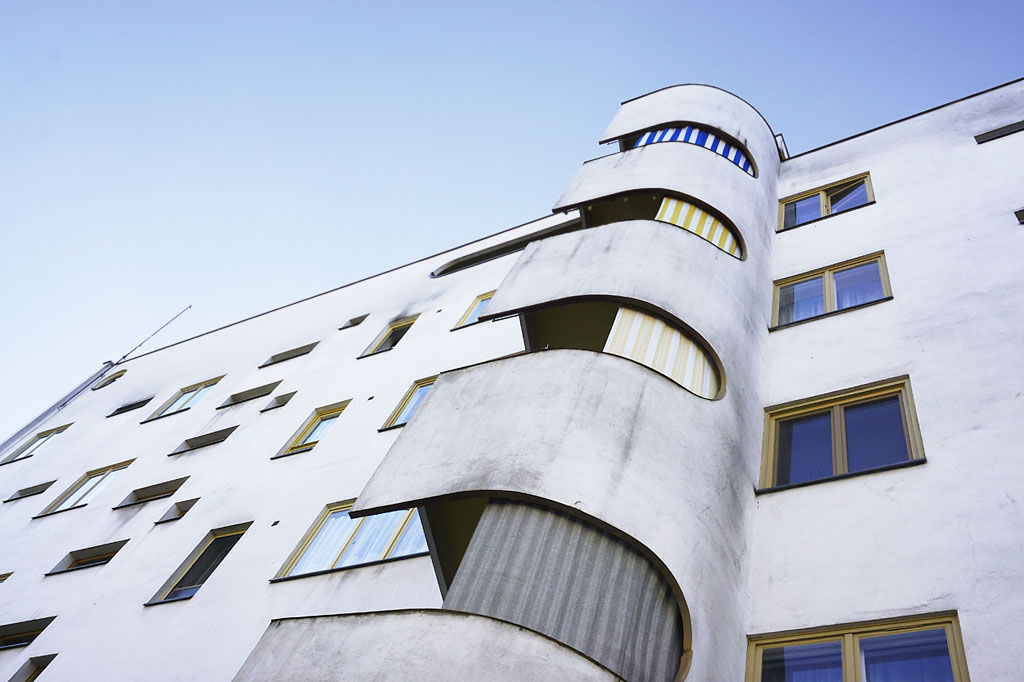 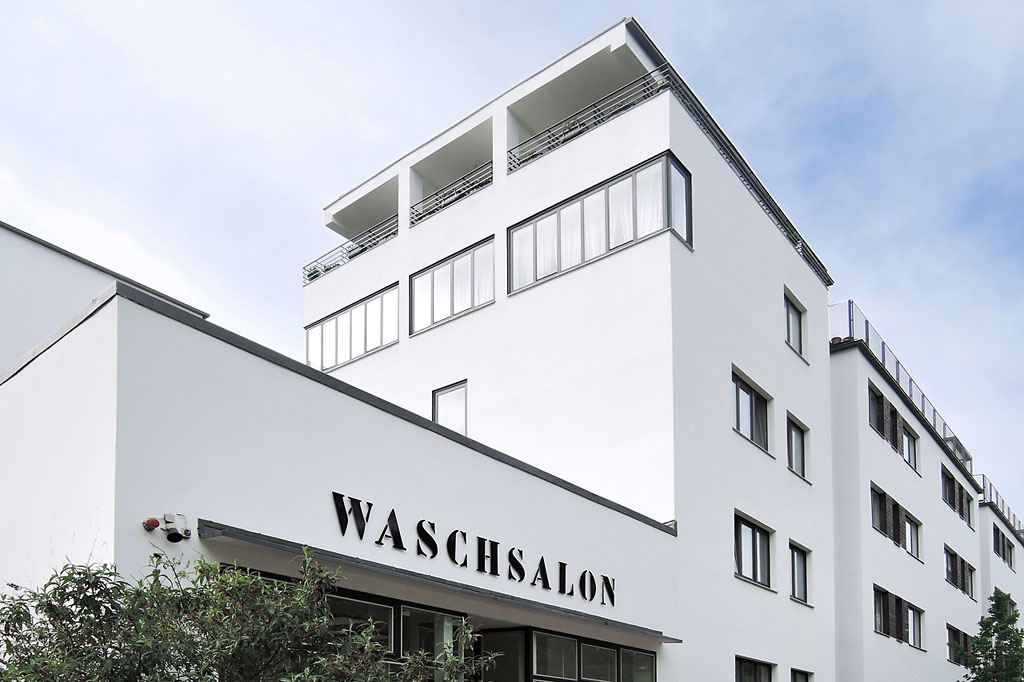 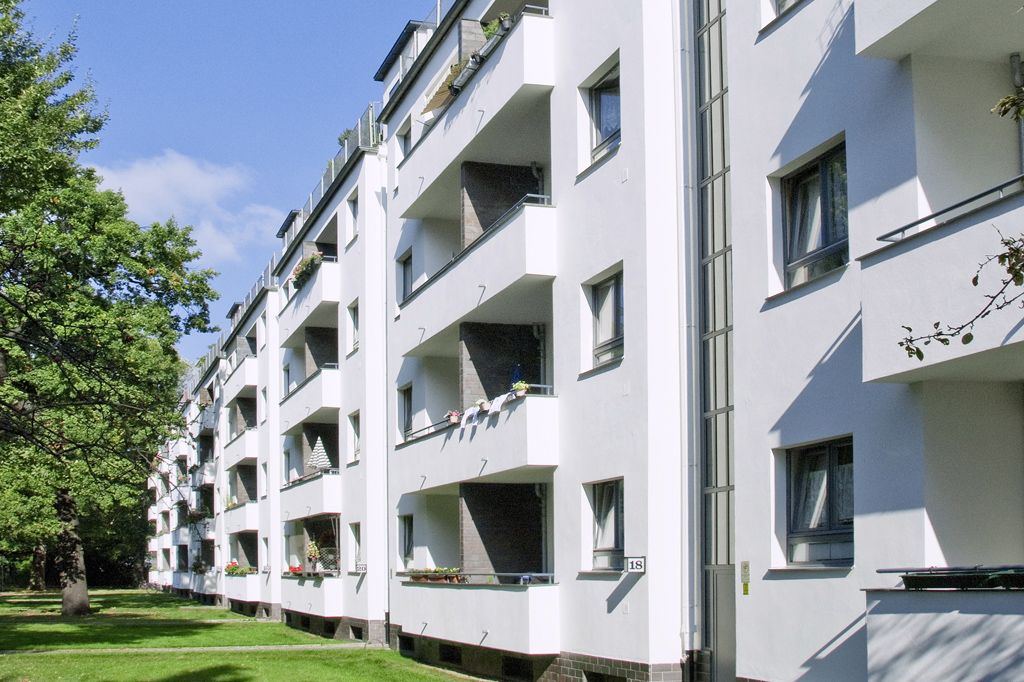 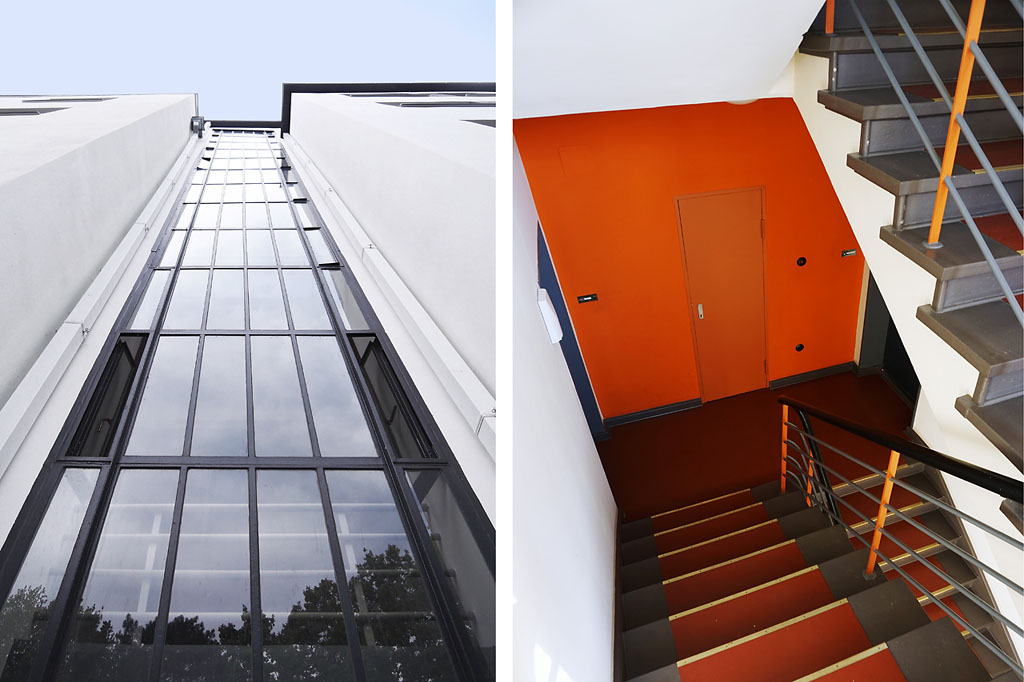 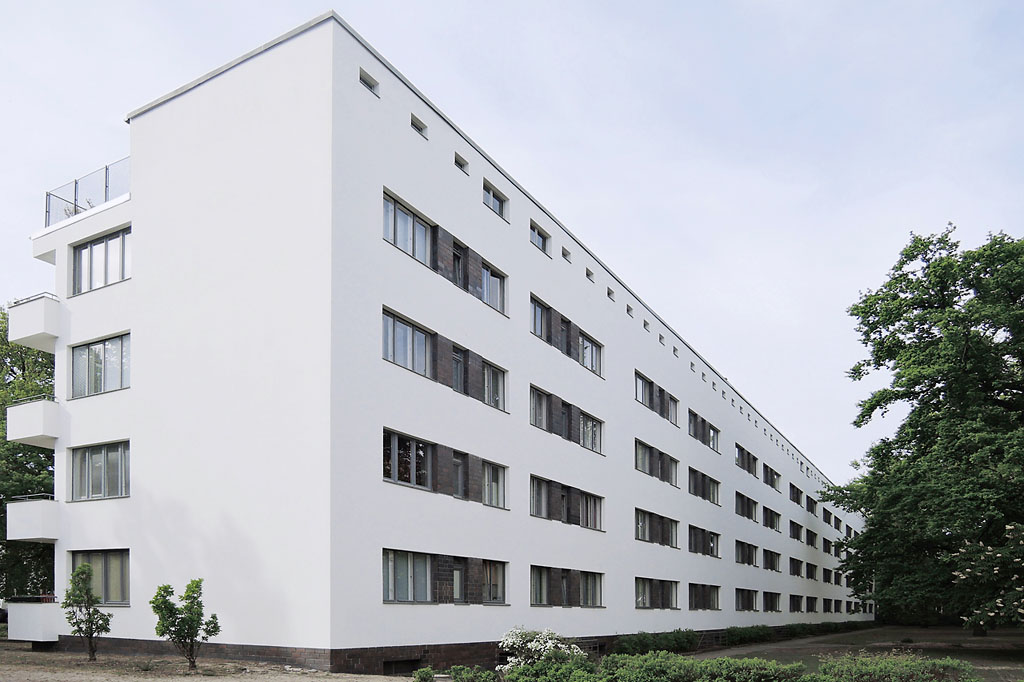 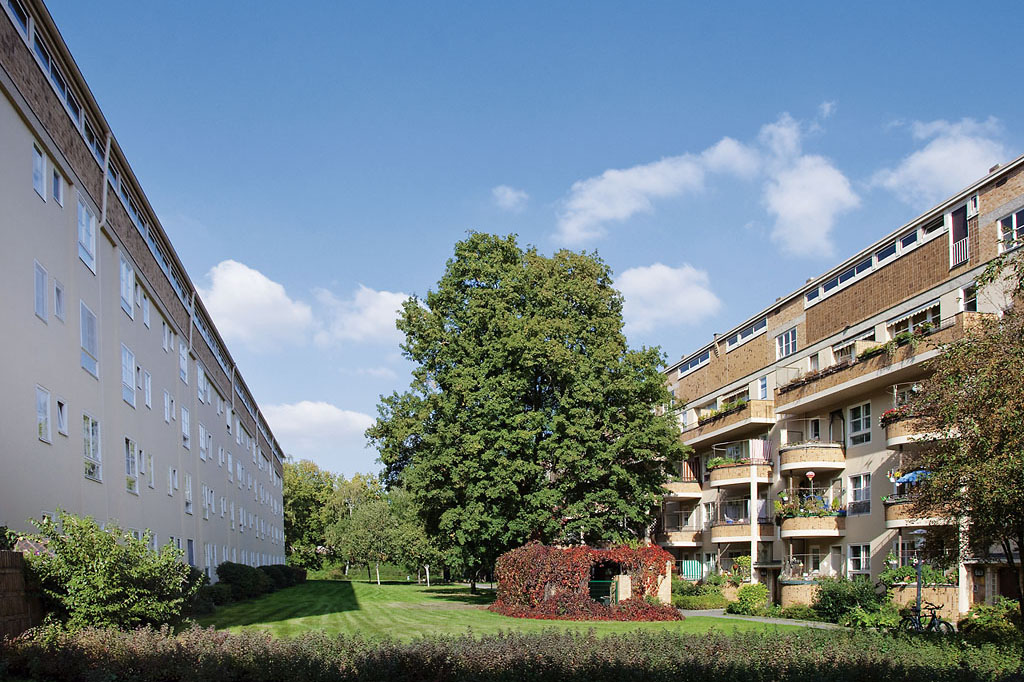 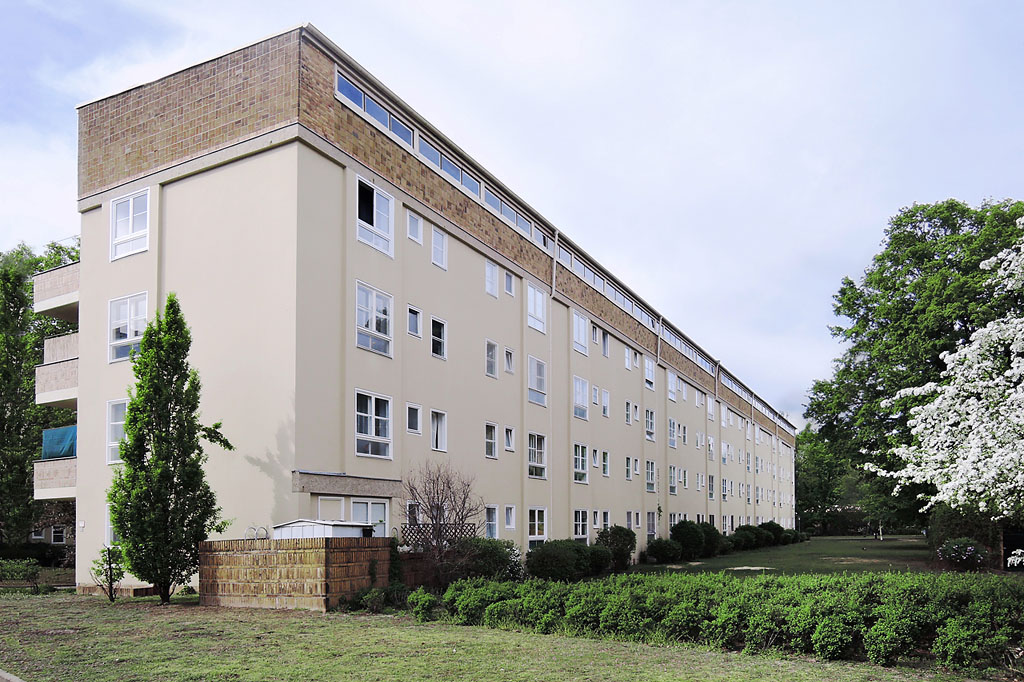 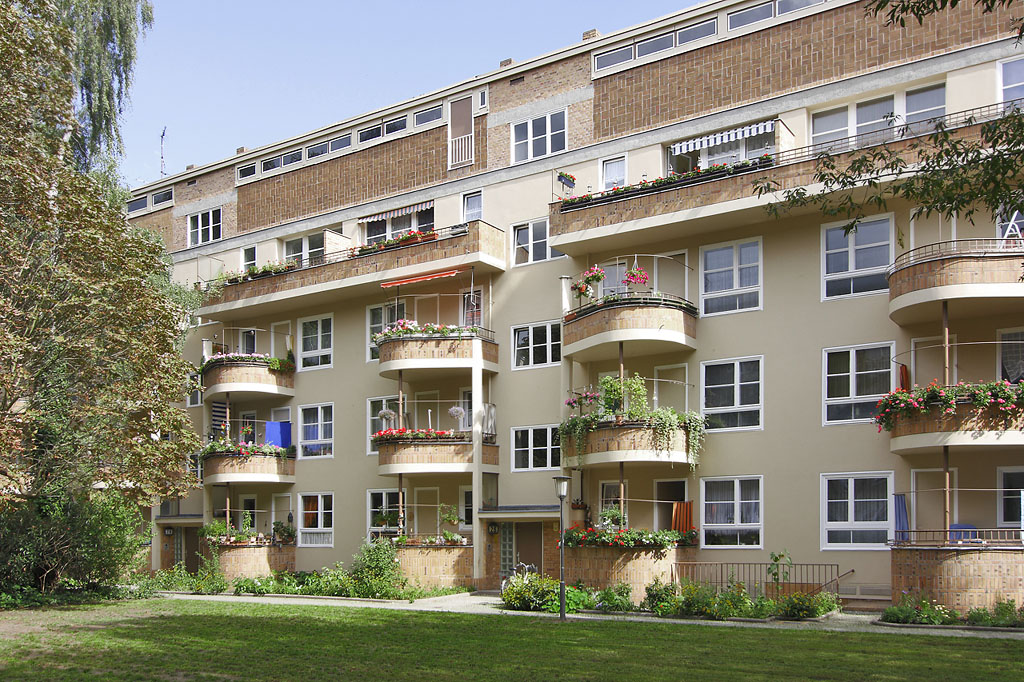 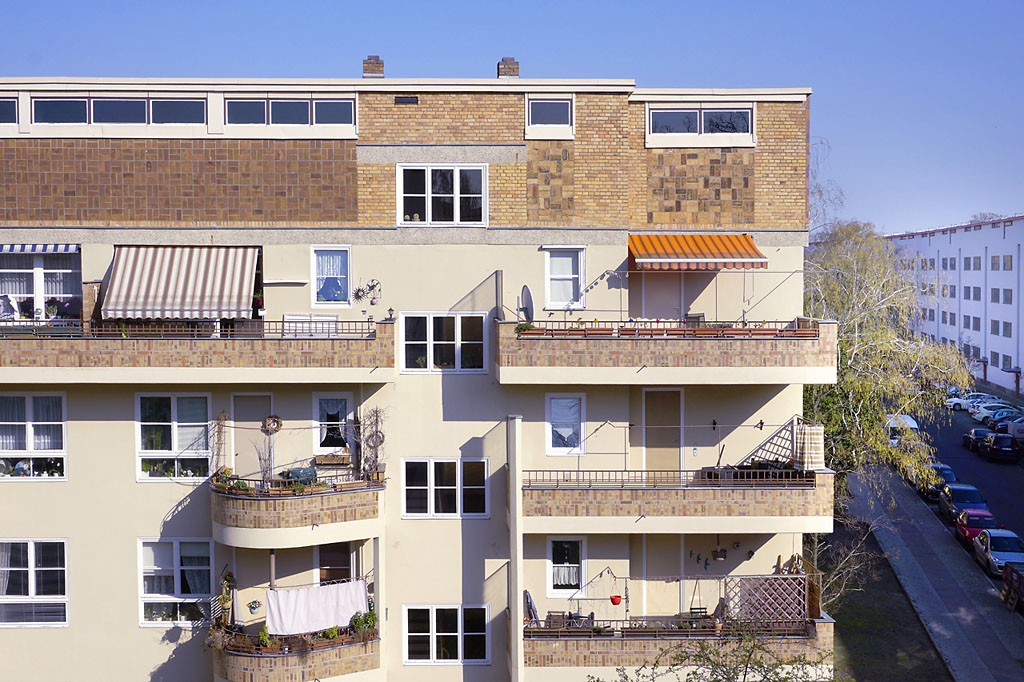 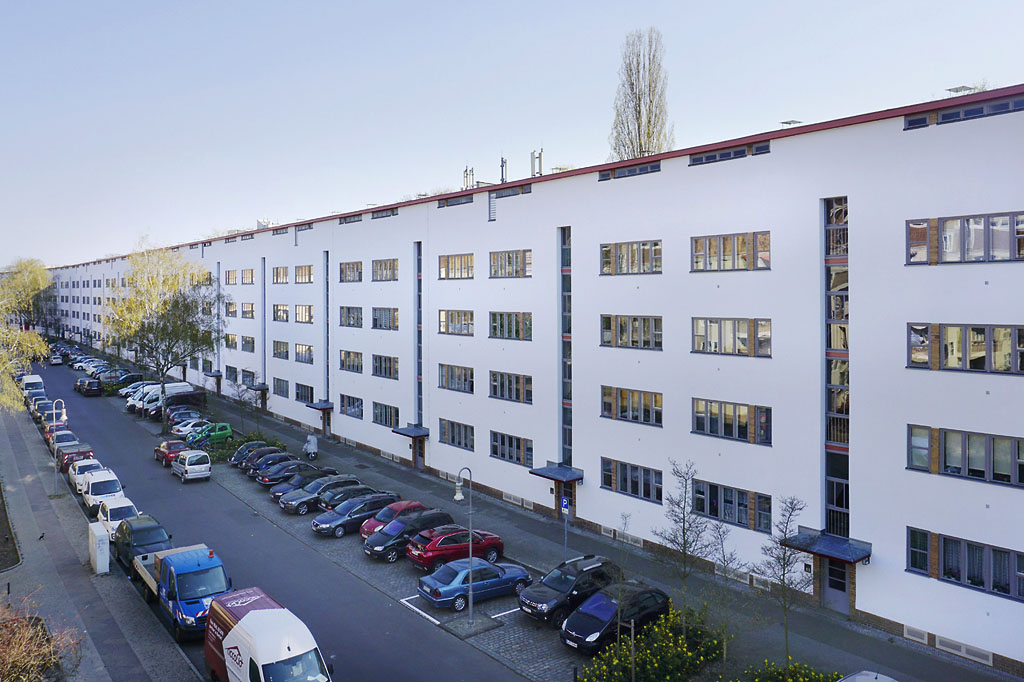 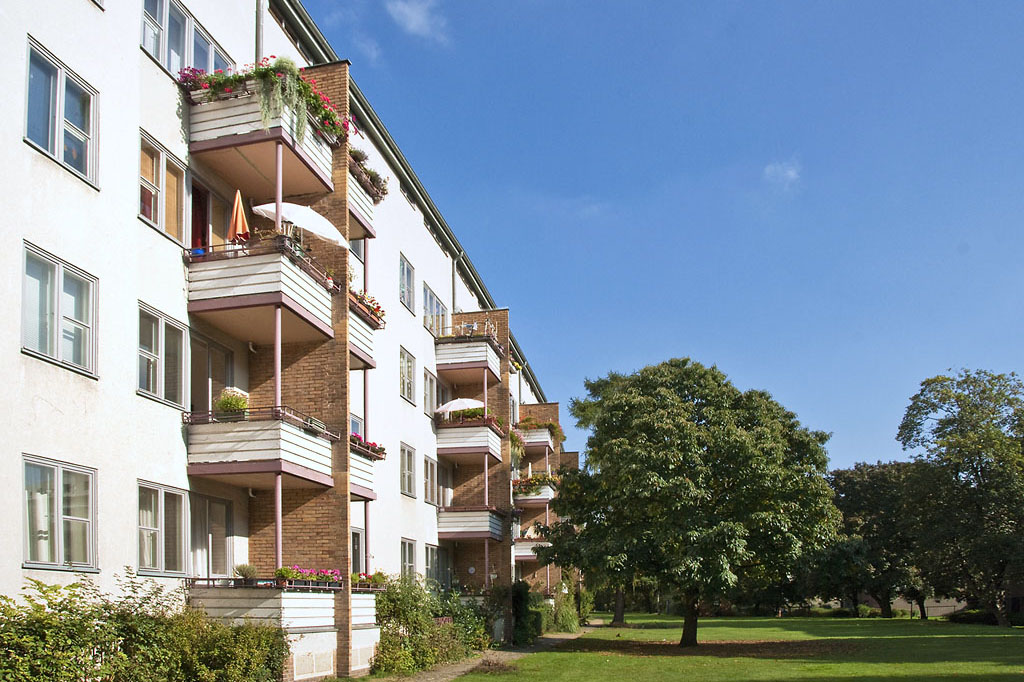 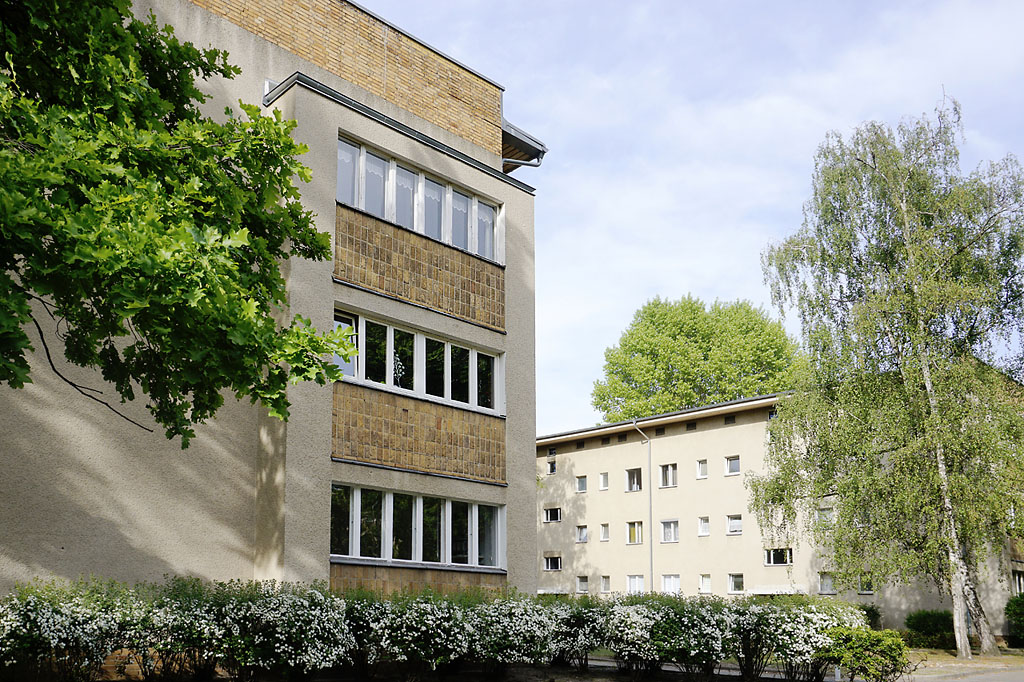 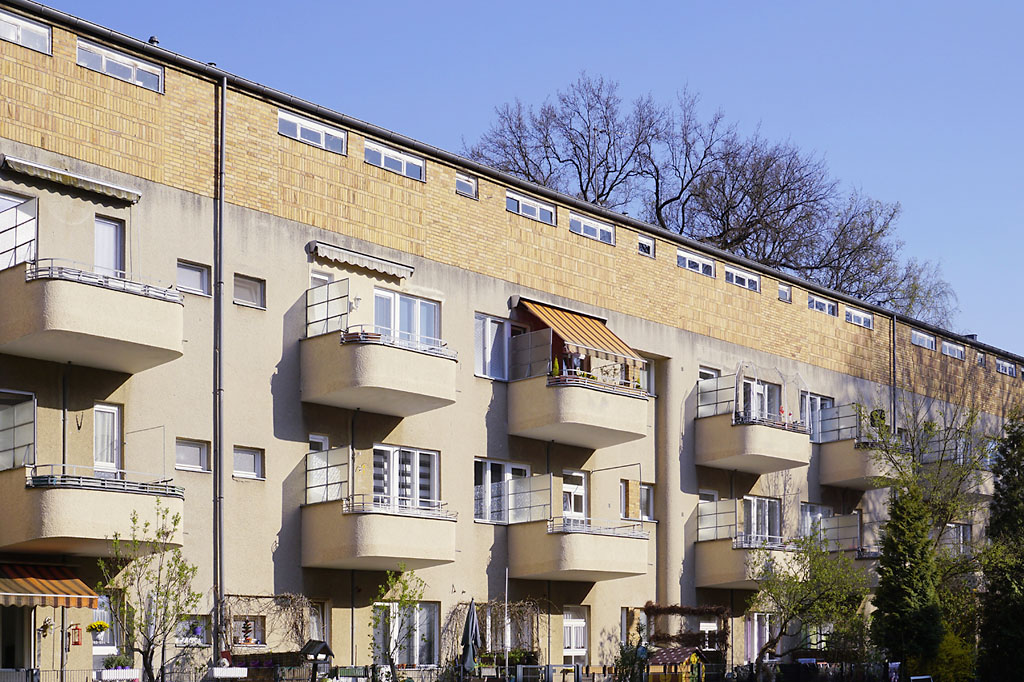 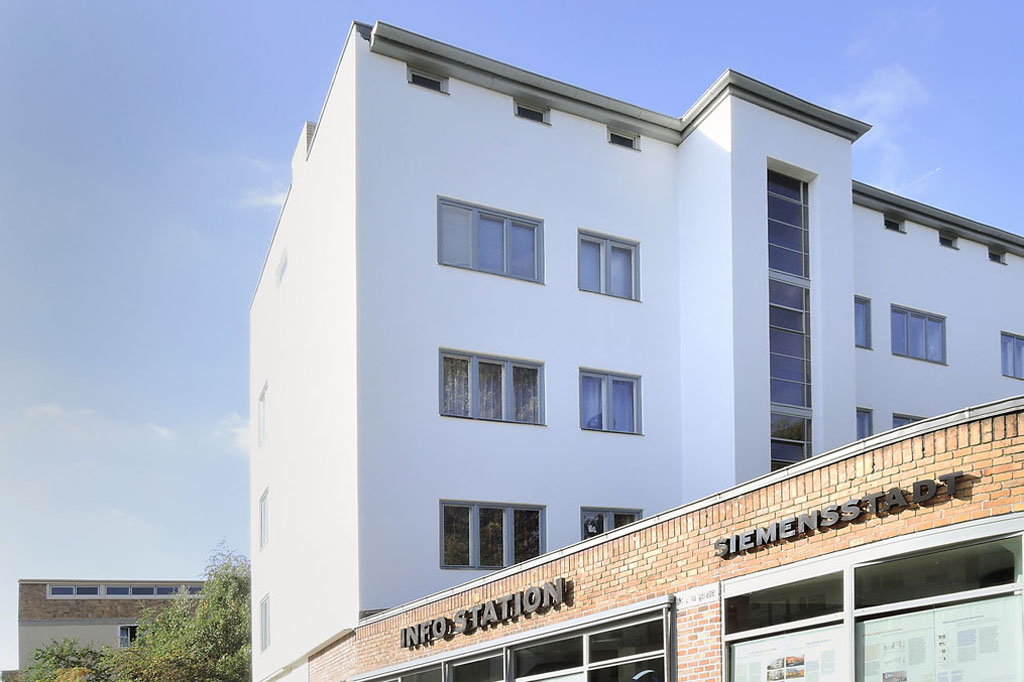 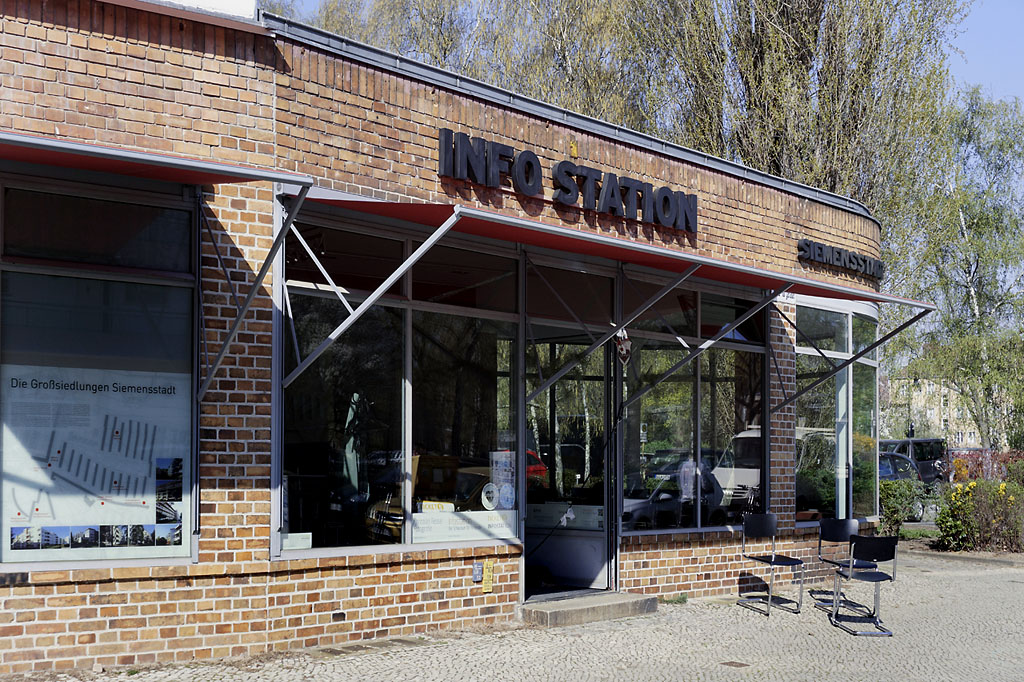 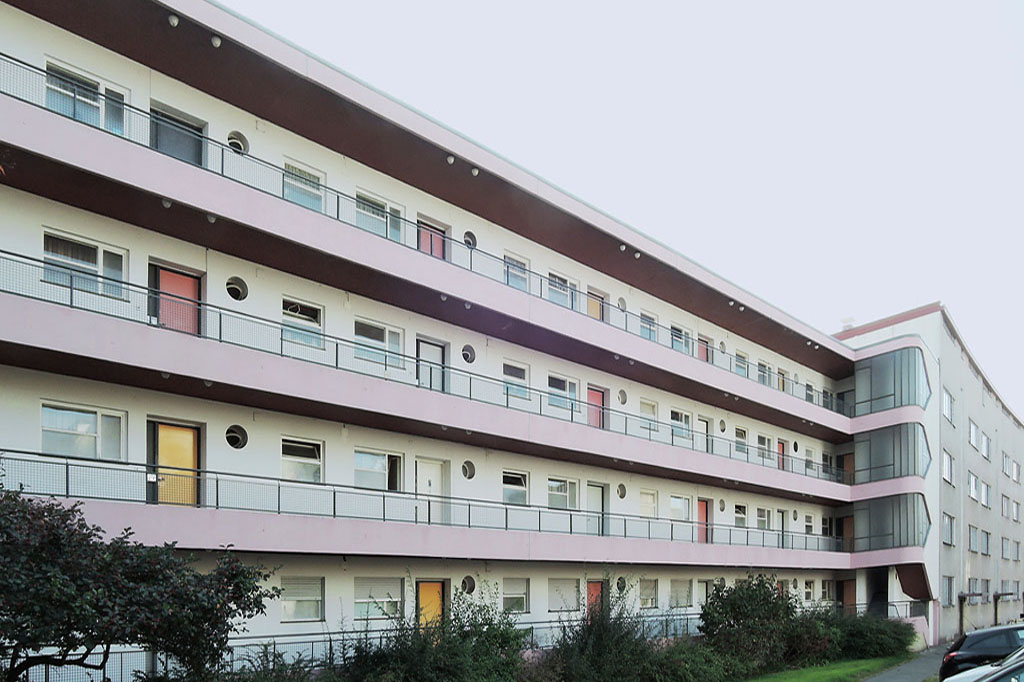 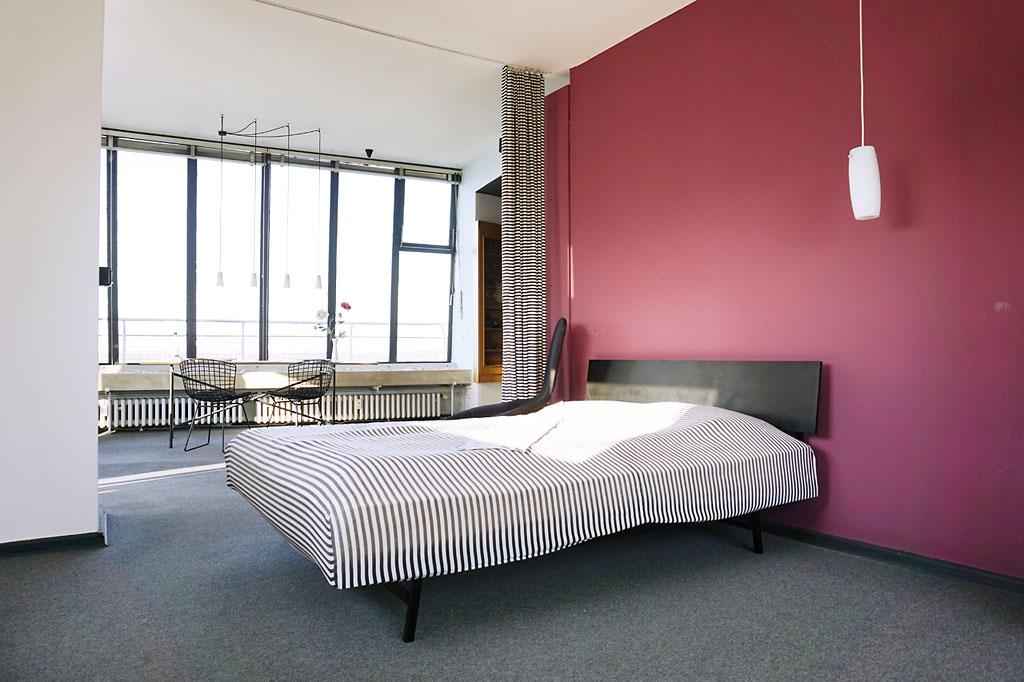 Drawing on Hans Scharoun's urban blueprint, several outstanding talents of the New Building movement helped to design the Siemensstadt Large Housing Estate. All of them were members of the progressive architects' group "The Ring", which is why the development was swiftly dubbed the "Ring Estate”. Of all the World Heritage Sites, Siemensstadt diverges the most from the conventional pattern of perimeter block development.

The architects commissioned to build the Siemensstadt Large Housing Estate opted for several multi-storey apartment blocks, preferably arranged in parallel rows and just deep enough for all apartments to have windows on two opposite sides. In 1928, this construction had not yet been tested much, but it was considered to be quite progressive and convenient. One of the benefits would be an optimal use of natural light: if the rows ran north to south, the bedrooms would be exposed to sunlight from the east in the morning, and the living rooms from the west in the evening. The long blocks of flats would run perpendicular to the road and be accessed only via narrow footpaths, meaning the entrances cost less to build and consumed less space. This arrangement also met the goal of preserving as much of the original landscape as possible. The planning area for Siemensstadt was essentially a meadow with some wooded terrain of mature trees, and the architects’ task was to preserve this natural character. For the same reason, plans to create tenants’ gardens on older housing estates were dropped.

The first construction phase of Siemensstadt was financed by a special new urban building programme. This meant that building projects subsidised by the house interest tax no longer had to adhere to original specifications, at least for the time being. Berlin's municipal building officer, Martin Wagner, became lead manager of the Siemensstadt project. Completely new floor plans and house concepts were to be developed, which stood to make Siemensstadt something of an architecture exhibition. Officially, an exhibition would have included tests and demonstrations of new building techniques, but that risked increasing costs and was thus avoided. Wagner invited some of the most progressive planners of the day to do the work, and six structural architects eventually submitted a plan for the entire estate. All of them were members of the Ring architects' group, which inspired the nickname Ring Estate that is still in use today (although it is often misunderstood as a reference to a circular layout). After some discussion, the architects agreed to use Hans Scharoun's design as the project blueprint. Wagner provided extra support by hiring landscape architect Leberecht Migge, who had already made a name with his work on housing estates. Although the Ring planners wanted a range of architectural details, they were united in their rejection of ornamentation. Simplicity, clarity and honesty were elevated to a principle.

The Siemensstadt planners deliberately distanced themselves from the architecture of the German Empire, a style considered dishonest because it relied too much on superficial appearance and unnecessary decoration. At the same time, these Ring architects wanted to pave the way for more democracy by crafting a formal language that was more strongly oriented towards Functionalism, rather than imitate magnificent palaces and stately architecture. This new language was also intended to express the growing self-confidence of the broader population. As a result, the apartments in Siemensstadt were planned mainly for members of the less affluent classes. Although all the planners agreed on common basic principles, a tour of the estate clearly reveals the hallmarks of the individuals involved – Walter Gropius, Hans Scharoun, Hugo Häring, Otto Bartning, Fred Forbat and Paul Rudolf Henning.

Regardless of what the name might suggest, Siemensstadt was not built strictly as a housing estate for factory workers of the Siemens company nearby. The name was not a mere coincidence, but an expression of changed requirements: as the world economic crisis loomed, income from the housing tax practically collapsed in 1928. For Berlin, this meant that funding was not available for 2,000 apartments that had been planned.

To help alleviate a serious housing shortage, the city set up a supplementary programme in 1929 that made 15 million Reichsmarks available for erecting housing estates. In order to employ these funds effectively and for the common good, a number of requirements were set: the land should already be owned by the city and, if possible, located near an industrial area that was accessible by public transport, so that the new dwellings would be suitable for the local workforce and development costs would be kept down. The developer was to be a non-profit municipal housing association and a maximum 7,211 Reichsmarks could be spent per apartment. The task specified in the brief was to put “the largest possible number of beds into a minimum of living space […] without endangering hygienic, social or moral standards". Mainly small apartments were planned: 30 percent measuring 46 square metres, 50 percent at 54 square metres, 10 percent at 62 square metres, and the remaining 10 percent at 72 square metres.

The concepts successfully tested at Siemensstadt – multi-storey buildings mostly organised in rows – became a leading model for residential construction in the post-war years. Nearby, the Charlottenburg North housing estate built in 1956-61 provided living space for another 12,000 people in 4,000 apartments. It was planned by Hans Scharoun and Otto Bartning, who had already worked on the Siemensstadt project.

Urban planning always forms the framework for community living and should ideally create a feeling of solidarity. In 1927, Hans Scharoun – who would later draft the master blueprint for Siemensstadt – had already stated his goals for this as follows: "Neighbourhood is a spiritual energy [...]. It is a space that a pedestrian crosses in about a quarter of an hour, a space that mirrors the child's joy of experience, is large enough to experience adventures, small enough to create a feeling of home.” Unlike the rather village-like structures of Falkenberg Garden City and part of the Horseshoe Estate, Siemensstadt did not have any tenants’ or house gardens. Of course, this situation put paid to the notion of self-sufficiency, an idea that was previously central to the garden city movement. At the same time, however, this shift focused planners on creating public open spaces, additional buildings and facilities. The large areas between the apartment buildings were to be used jointly. This would not only cut property and building costs, but also help to preserve the grassland character that was once part of the extended Jungfernheide area and Volkspark Jungfernheide, which adjoins the Siemensstadt estate to the north-east. This public park was laid out in 1920-26 according to plans by Erwin Barth, Charlottenburg’s gardens director, and was designed as a recreation area for residents and other local housing areas planned for the medium term. Apart from sweeping meadows, sports fields and forest-like elements, there was an open-air theatre, a swimming area and a water tower that today houses a small café. All these features suited the new estate perfectly and reflected the slogan “light, air and sun”, a guiding principle for Berlin’s reform-oriented housing movement in the early 1920s. The new approach also dealt with austerity constraints, which meant that individual gardens were no longer in keeping with the financial demands of mass housing.

Community use played a major role in the planning of Siemensstadt. Its green spaces would not be open to the general public, nor would they be fenced off as tenant gardens. The planners were also concerned about hygiene, a matter that was inseparable from the social aspect and demonstrated how the sociopolitical dimension was inherent in urban development. Although most of the apartment blocks had their own laundry rooms, a community laundry was also set up with modern washing machines. It was located next to the heating plant and equidistant from the eastern and western reaches of the estate. There were playgrounds for children nearby, which were well received by mothers who usually looked after the children while doing the laundry. By taking this housework out of the private sphere, the community laundry changed women’s role in the household and encouraged more communication and contact with the neighbours.

In his buildings along the street Jungfernheideweg, Walter Gropius planned roof terraces for communal use. Housed in a new type of pavilion, the school was designed by government architect Walter Helmcke and built in the second construction phase starting in 1929. The school has six classrooms arranged alternately on either side of a long corridor. Lessons could be given outside in fine weather.