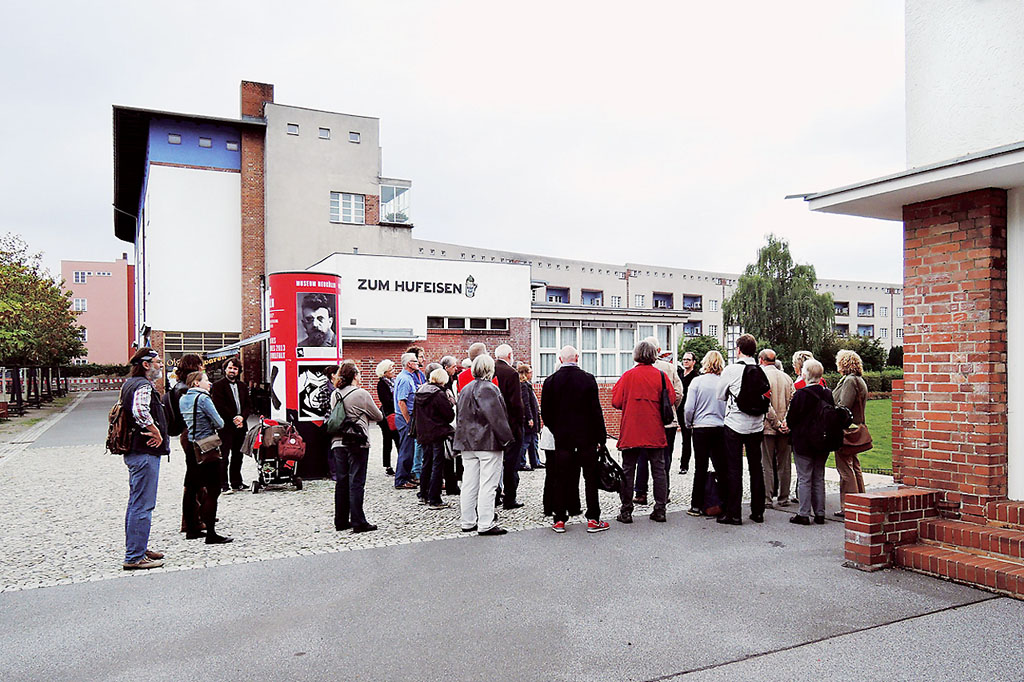 A few words about
this project, its origin and purpose

In 2008, six "Berlin Modernist housing estates" were included in the UNESCO World Heritage List. They were created in response to the great housing shortage of the early 20th century and were a worldwide trend-setter in terms of urban development, social and political issues. The designation as UNESCO World Heritage sites is also accompanied by the requirement to provide information on the respective World Heritage sites in an appropriate form. The historically multi-faceted and today's topical subject of social housing construction of the 1920s is to be attractively presented on this website for interested citizens, young adults and visitors.

Objectives
This website is optimized to be used on smartphones and rather small displays. It is therefore also suitable as a mobile companion. The historic and architectural content is enriched with additional information in the areas of urban, contemporary and cultural history, thus conveying a broad spectrum of information about the 1920s - an era that had a decisive influence on the urban structure and self-image of Berlin. With the virtual tours, settlement specific questions and topic-related tasks presented here, this website can and should also be used in youth and adult education.

The "Berliner Forum für Geschichte und Gegenwart" (Berlin Forum for the History and the Present, abbreviated "BFGG e.V."), is a non-profit association without institutional support. It was founded in 1991 by experts from museums, cultural studies, history and urban planning. By dealing with the past and present, and by communicating these issues in a way that is professionally and medially effective to the public, it contributes to democracy, historical awareness and international understanding. It achieves its aims through scientific publications, events, conferences, exhibitions and further education courses on historically significant places and objects in Berlin. Among other things, the association has implemented several signage and information systems in the Berlin urban space, such as the picture gallery at Checkpoint Charlie, the Berlin Wall Trail, the Café Haberland or the historical commentary on the Olympic Stadium.

About the author,
photographer, designer and initiator

The entire design and large parts of the implementation have been carried out by Ben Buschfeld (BB). He works as a self-employed graphic designer and author, is a member of the BFGG e.V. and contributed about 90% of the texts and photos. As a resident of the Horseshoe Estate, he has designed, initiated and realised several projects and publications about architectural and historical topics. These publications include the permanent exhibition in the Infostation in the Hufeisensiedlung, a web-based monument platform, a printed guide book and a mobile exhibition about the six UNESCO-listed housing estates. Buschfeld is co-organiser of the Triennale der Moderne – Berlin, Dessau Weimar. Together with his wife – landscape architect Katrin Lesser – he runs the rentable museum Tautes Heim (Taut´s Home), a tribute to the interior design principles of the architect Bruno Taut. Buschfeld is a member of various networks and associations. His work was frequently awarded, i.e. with the "European Union Prize for Cultural Heritage" or the Berlin Monument Award. In addition to his work as a designer, he occasionally guides groups through the World Heritage sites.

Please get into contact if you have any enquiries about photographic material or if you would like to take over the mobile exhibition. Further information and contact options at

A few words about
UNESCO World Heritage sites in Berlin

Berlin has three UNESCO World Heritage Sites. The first was the Prussian Palaces and Gardens in Potsdam and Berlin, which were inscribed as World Heritage Sites in 1989 - following an application by the GDR. This was followed in 1999 by the inscription of the Museum Island of Berlin and in 2008 by the Berlin Modernist Housing Estates.

Berlin's most recent World Heritage Site comprises around 220 hectares of land on which 6,000 residential units are home to well over 10,000 people. The fact that the housing estates are in good to very good condition today is due to the constant work within the Berlin monument preservation authorities, as well as continuous investment by the federal government, the state and the two major owners, Deutsche Wohnen SE and the Berliner Bau- und Wohnungsgenossenschaft von 1892 eG. However, the housing estates also benefited greatly from a co-funding program launched by the Federal German Ministry for Building Affairs in 2019 for investments in national UNESCO World Heritage Sites. The restoration and maintenance of the monuments was supported by external experts, who laid down the basic principles that became manifest when the sites were inscribed on the Berlin List of Monuments. Here, the continuous work of "Brenne Architekten" is particularly noteworthy. Their expertise was complemented by further research projects in the field of garden monument preservation. Many projects for the public communication of Berlin's most recent World Heritage Site are based on the commitment of local residents and civil initiatives. This bilingual website also fits into this context.

Contemporary colour photographs
unless otherwise noted, all photos were taken by

Note: For the sake of simplicity, the two main photographers are named with initials only. Both authors are represented by VG Bild according to German copyright regulations.

Preamble
All reproduction rights are - unless otherwise stated in the caption - held by the photographers, authors or lending agencies and archives and may not be used or copied without their explicit written permission.

Use in the context of project documentation
All use of extracts from this website is exempt in the following contexts:

Special conditions apply within the communication of the World Heritage Site by governmental authorities or such organisations dealing with UNESCO World Heritage communication on an official, non-commercial basis. Any exemptions and/or special conditions may NOT be transferred to third parties without prior written agreement. This includes all forms of commercial use, such as by providers of guided tours or other tourism-related, educational or commercial organisations. The German copyright laws apply. License fees are charged for the granting of rights of use.

Use in the context of school or study work
All image material used on this website is - unless marked as public domain in the caption - protected by copyright. The use of all photographs by Ben Buschfeld (BB) and Katrin Lesser (KL) is free for school or homework purposes. However, the authors ask that the source and the full name of the photographer be indicated. Any use beyond the purely school and/or university context (e.g. if images are to be published publicly) requires permission. License fees may apply here.

Other information
Should there be any doubt about the legality of such illustrations, which have been marked as "in the public domain" and circulated by third parties, the operators ask for notification and will immediately endeavour to replace, correct references, clarify or delete them.

Linked content
The creation of links on educational portals is expressly desired. However, the link should be made directly to the start page or clearly indicate source, origin and authorship. The integration of text passages and images that visually fit into the design of other online offers without making the source visible (so-called "deep-framing" or via the use of "inline frames") is prohibited.